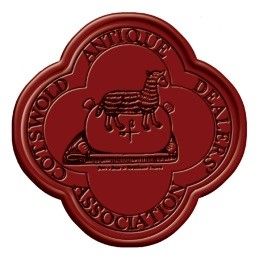 The annual Cotswold Art & Antiques Dealers’ Association Fair is taking place at a new venue this year - Compton Verney Art Gallery and Park in Warwickshire - the first since 2019 as last year’s event was cancelled due to the pandemic. This ninth annual fair opens from Thursday 14 to Sunday 17 October 2021.

Entry to the event is free for CADA Fair ticket holders. An upgrade ticket to visit Compton Verney's upstairs exhibitions is available for £5.50 on site.

At the time of the fair, Compton Verney Art Gallery itself is hosting Grinling Gibbons: Centuries in the Making commemorating the remarkable life and legacy of Grinling Gibbons (1648-1721), as part of a year-long series of events to commemorate the tercentenary of the most renowned British woodcarver of the 17th century, often called the ‘Michelangelo of Wood.’ The exhibition, Centuries in the Making - produced in partnership with the Grinling Gibbons Society - will reveal the life, genius and legacy of this legendary sculptor and craftsman, who died in August 1721. 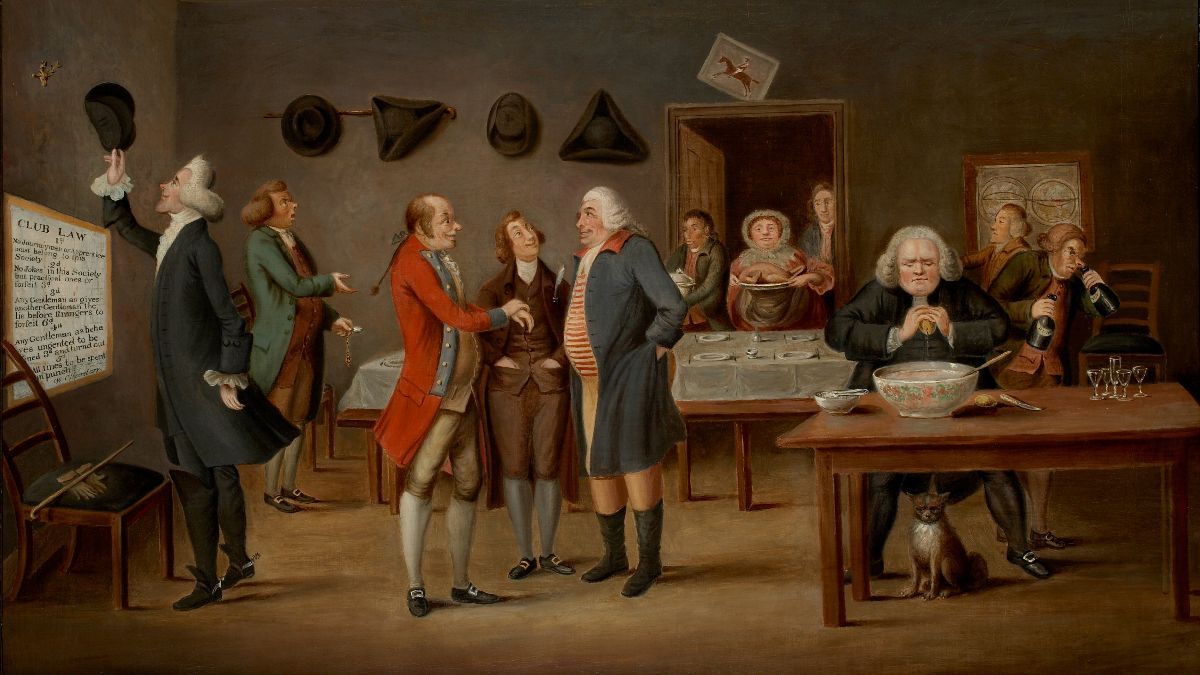 If the Grinling Gibbons exhibition proves inspiring to visitors, Shaw Edwards Antiques has a range of carved oak pieces for sale at the fair, covering the 15th to 18th centuries, amongst which is a 15th century Flemish oak carved angel depicted playing a musical instrument. It has been carved in the round indicating that it was probably part of an altar group with this as one of the ‘heavenly hosts’, £4,450 and a pair of 17th century French oak carvings, circa 1650, £850 the pair.

More stunning wooden furniture and other items for sale at the fair include a rare and important Regency period coromandel centre table, circa 1800-1810 from Freshfords Fine Antiques. Measuring 127cm in diameter, the open fret carving has an Asian style and depicts mystical shapes, centralised with hearts, and is priced at £30,000.

Tobias Birch brings an exceptional month going mahogany wall regulator by Richens Bath, circa 1870, priced at £28,000 and a George III mahogany timepiece with white enamel dial, signed John Horn, circa 1800, £6,500. Mark Goodger Antiques exhibits a fine collection of antique boxes and tea caddies with many different uses, amongst which is a pair of Georgian cutlery boxes, veneered in flame mahogany with naive conch shells and diamond-shaped bone escutcheon, circa 1795, £3,950. 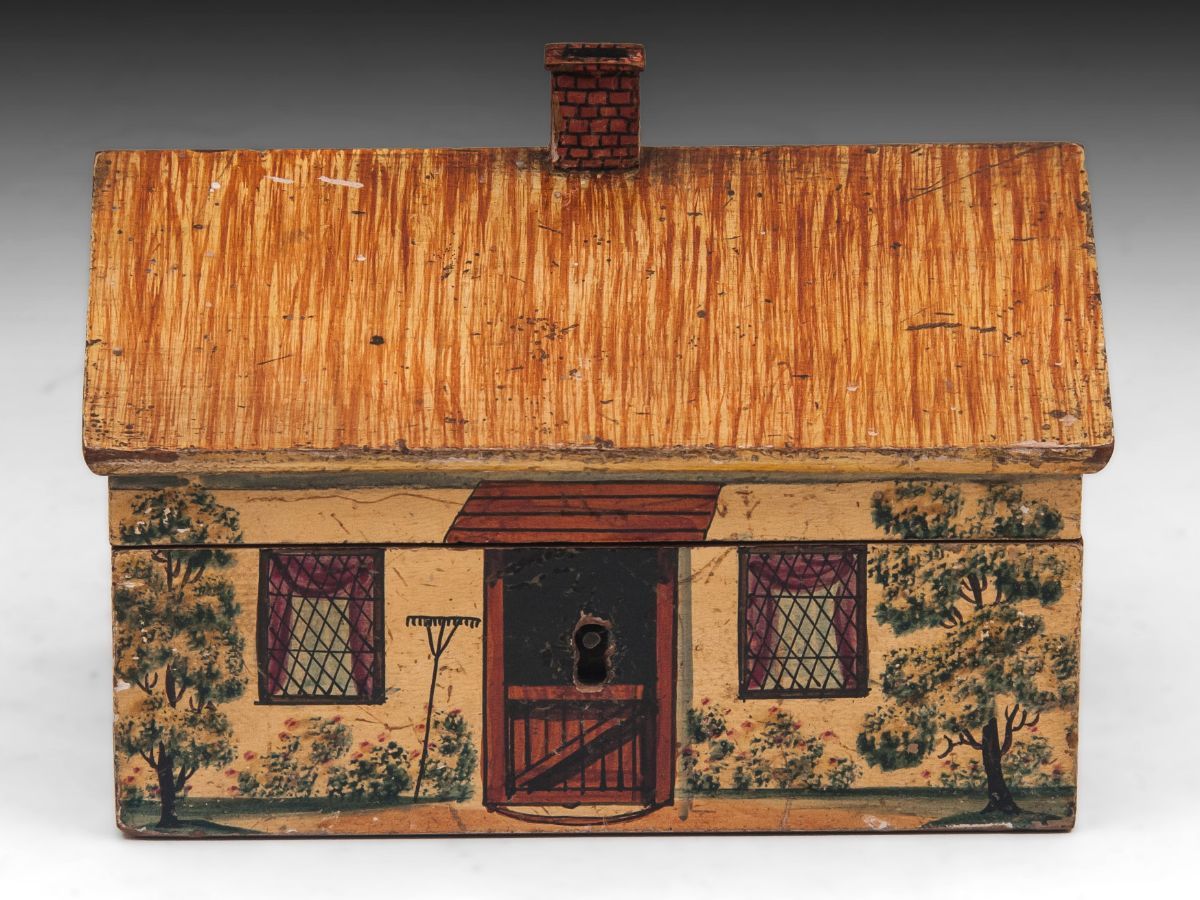 David Pickup Antiques is bringing a fabulously proportioned oak bench with woven leather top and chamfered stretchers, designed by Gordon Russell (1892-1980) in the first year of Russell’s production in 1923 and described as ‘a fireside bench in oak’. W.R. Harvey & Co. (Antiques) Ltd has two 17th century escritoires, each priced at £60,000, one being a William and Mary period kingwood fall front escritoire attributed to Thomas Pistor, the other a Charles II period burr walnut escritoire containing some 40 drawers and secret compartments.

A highlight on BBC Antiques Roadshow expert Lennox Cato’s stand must be a rare William and Mary floral marquetry oyster veneered chest on stand in the manner of Thomas Pistor, who often used stained green ivory as decoration on ebony ground veneer, circa 1700, £32,000 and a very rare Chinese export games table made of solid padouk-wood with ebony stringing and satinwood crossbandings, circa 1790, £9,850.

More Chinese treasures can be found on Catherine Hunt Oriental Antiques’ stand. Made for the European market in the 17th century, when the fashion was for a Chinese themed room, are transitional wucai figures of the Hehe Erxian twins, made at Jingdezhen during the reign of the Emperor Shunzhi, the first Qing Emperor, circa 1650, priced at £5,750. The twins, each holding a small vase, are also known as the Twins of Harmony. A contender for our Prime Minister's home could be a Chinese export armorial plate, also made in the Jingdezhen kilns for a specific order at the end of the Kangxi reign or at the start of the Yongzheng reign, circa 1730, as it bears the arms of Johnson. 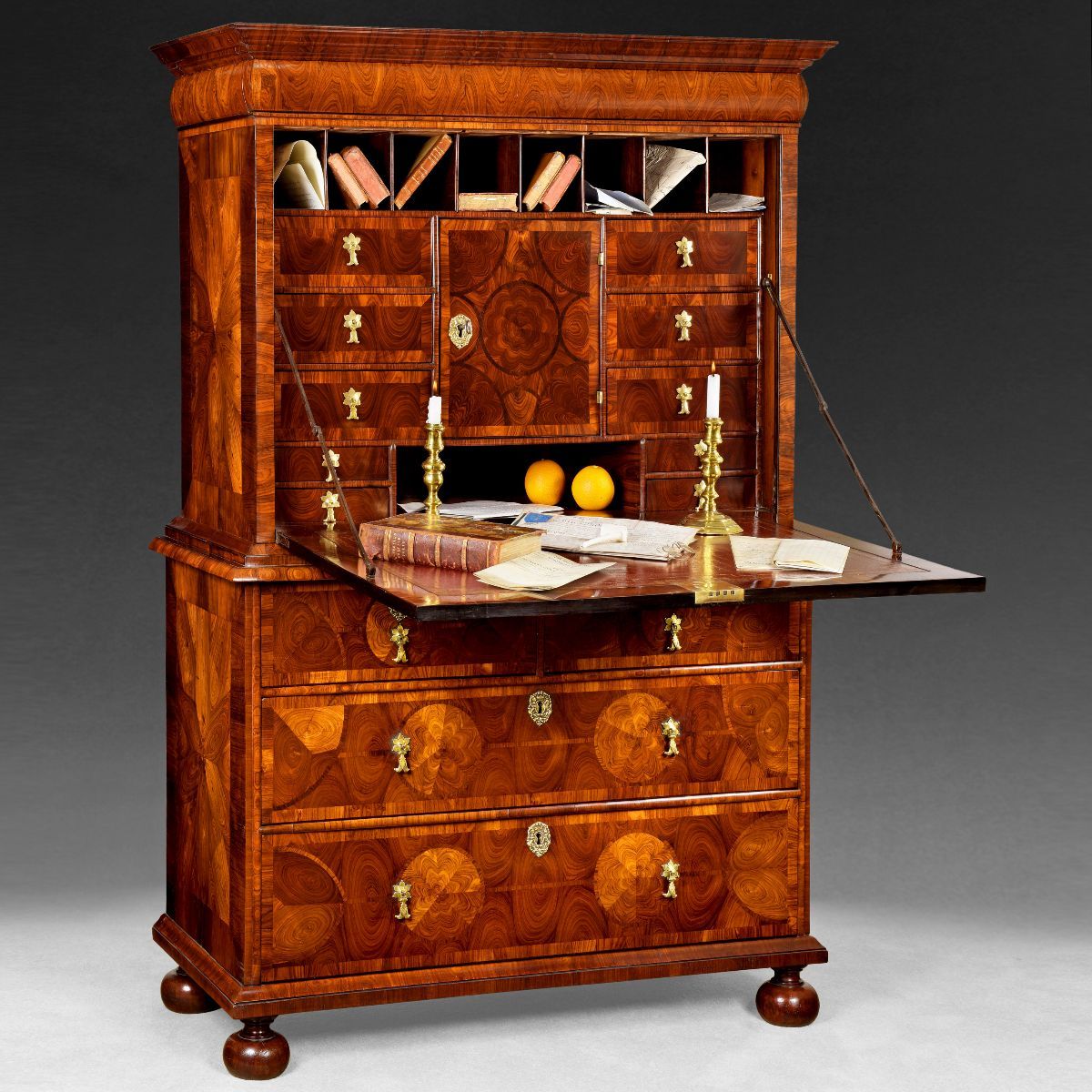 Paintings, etchings and lithographs cover many different genres, topics and eras. An unusual offering of local interest is a complete album of 18 watercolours of Warwickshire landmarks and views by the Coventry born artist Herbert Edward Cox (1870-1941) on Newman Fine Art’s stand, £1,450. The album was presented to F.G. Green Esq., inspector of schools, from the local teachers’ association upon his promotion to another district in October 1904.

Sarah Colegrave Fine Art also has a watercolour of local interest. 'The Quarry at Culver Hill, Amberley, near Stroud' was signed and dated 1928 by Henry Arthur Payne RWS (1868-1940) and has an asking price of £750. Payne studied under E.R. Taylor at Birmingham School of Art and joined the staff in 1889. He was commissioned to decorate the chapel at Madresfield Court, a task which occupied him for twenty years and is one of the great achievements of the Arts and Crafts movement. This also led to him painting a mural for the Palace of Westminster - his work 'Plucking the Red and White Roses in the Old Temple Gardens', an allegory on the War of the Roses, now hangs in the Palace's East Corridor. Payne settled in the Cotswolds, encouraging many other Birmingham artists to do the same. 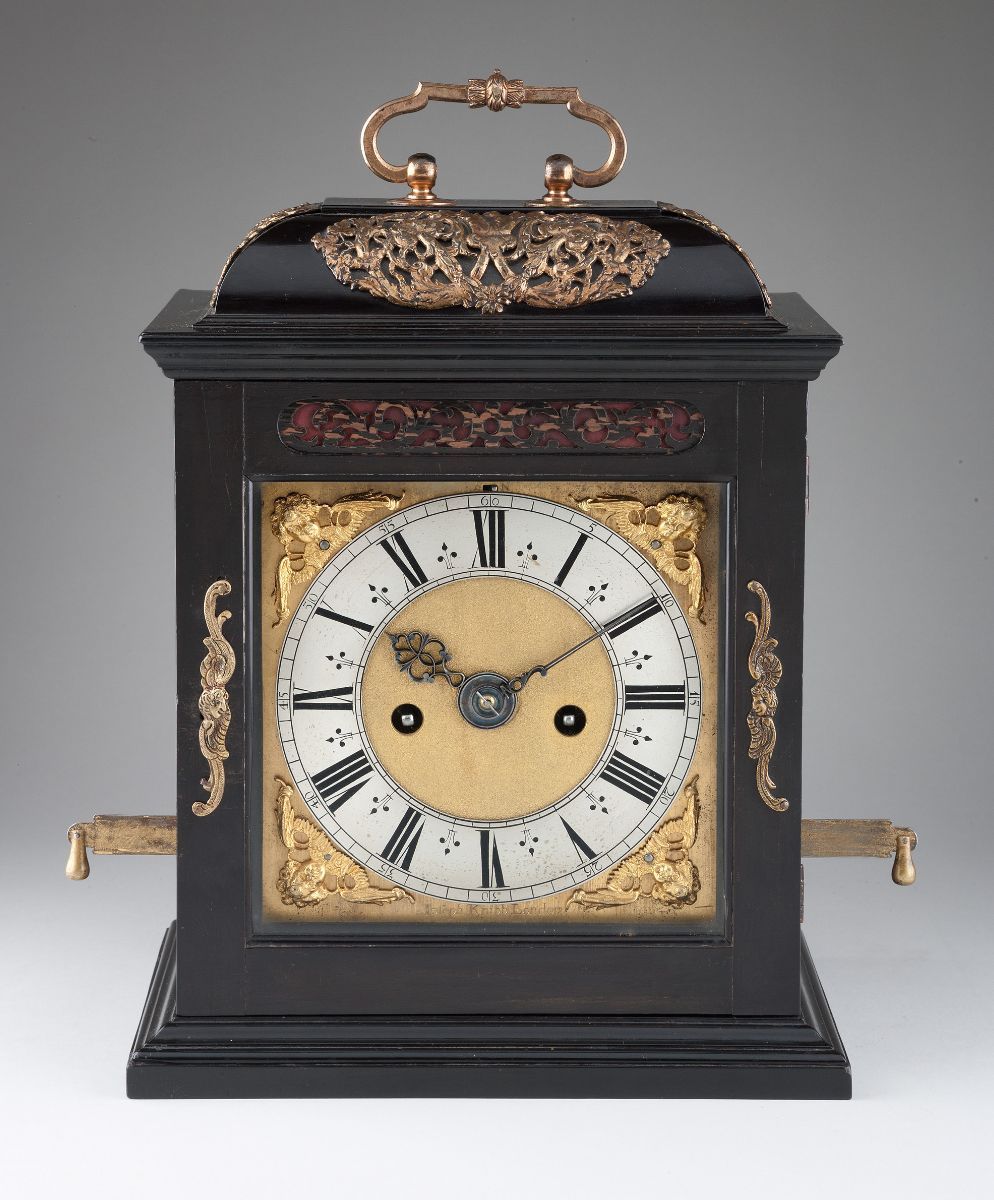 Fine portraits can be found for sale from several art dealers at the fair adding grandeur to an interior. An aristocratic beauty of the time, Trinity House Paintings shows The Honourable Frances Thynne, 'Lady Worsley, Wife of Sir Robert Worsley' and daughter of Thomas Thynne, 1st Viscount Weymouth of Longleat by German artist Sir Godfrey Kneller (1646-1723), one of many portraits of Lady Worsley who embodied the ideals of feminine beauty that were celebrated in the English Baroque period. 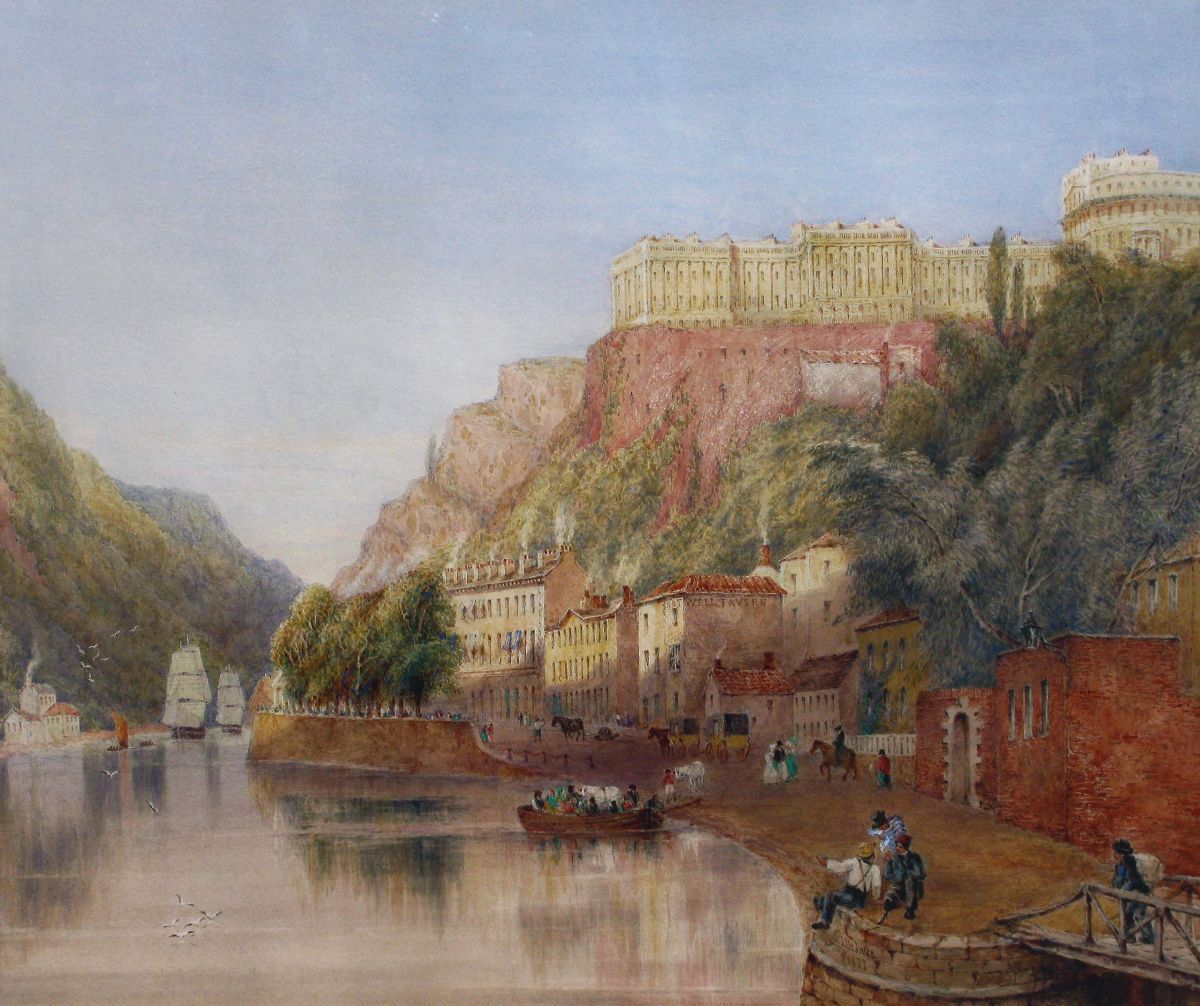 ‘Hotwells and the Avon Gorge, Bristol’ by Joseph Murray Ince, watercolour, signed and dated 1833, priced in the region of £3,500 from Newman Fine Art

The central figure in 'The Country Club' by Henry William Bunbury (1750-1811) is probably a portrait of William Hogarth and, at the punchbowl, Dr. Benjamin Hoadley the playwright, an oil on canvas to be found on Strachan Fine Art’s stand. Amongst Elizabeth Harvey-Lee’s original etchings is a portrait of Paul Cézanne by Camille Pissarro etched in the year of the first ‘Impressionist’ exhibition in Paris, in which Cézanne also participated, through the offices of Pissarro. In 1874, Cézanne was 35 years of age and living at Auvers-sur-Oise to be close to Pissarro, his mentor. In the last year of his life, 1906, Cézanne described himself as the pupil of Pissarro. 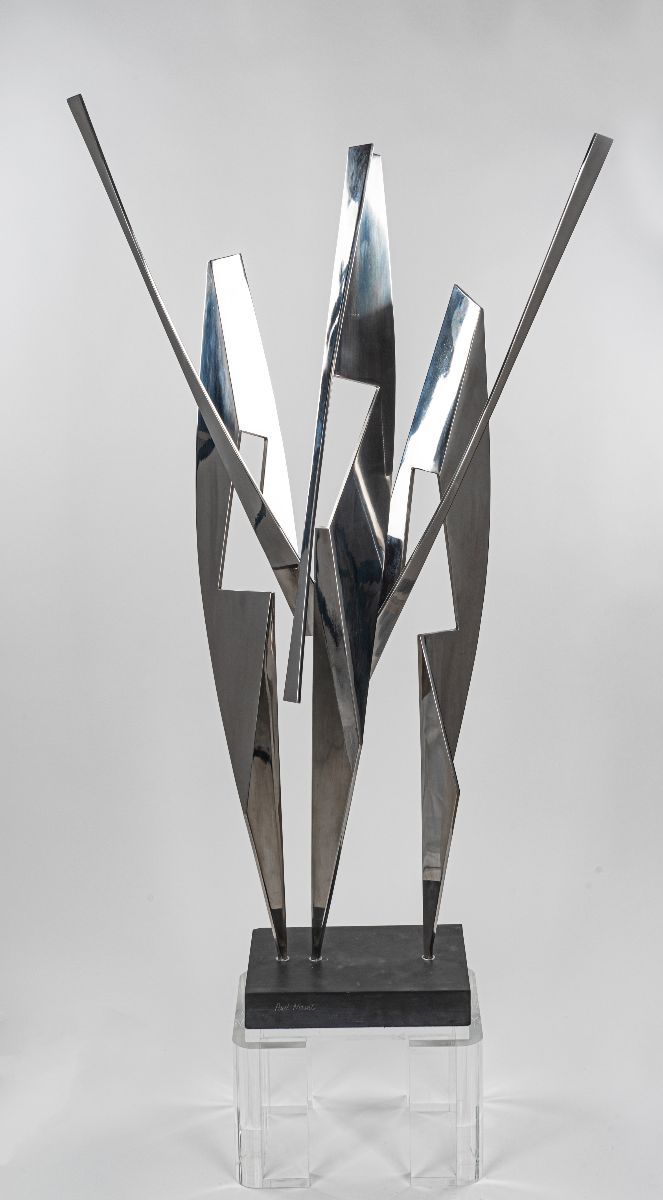 ‘Carnival’ by Paul Mount, stainless steel on slate base raised on a perspex plinth, c.1980, £24,600 + ARR from Architectural Heritage

Modern British art is well represented at the fair. New CADA member, Neil Schofield, is planning to show works by Ceri Richards, William Scott, Roy Turner Durrant and Mary Fedden, including a pencil drawing by Wilhelmina Barns-Graham that formed the basis for one of her most well-known and significant works ‘Cornish Landscape, Porthleven’. Freya Mitton also sells works by 20th century artists such as Diana Armfield, Mary Fedden, Ken Howard and Albert Irvin. Stuart Boyd Fine Art specialises in 18th and 19th century landscape and marine watercolours, amongst which is 'The Nab' by Frank H Mason (1875-1965) and a calmer pastoral 'The Close of Day' by Joseph H Swanwick (1866-1929), selling for £1,150 and £1,450 respectively. 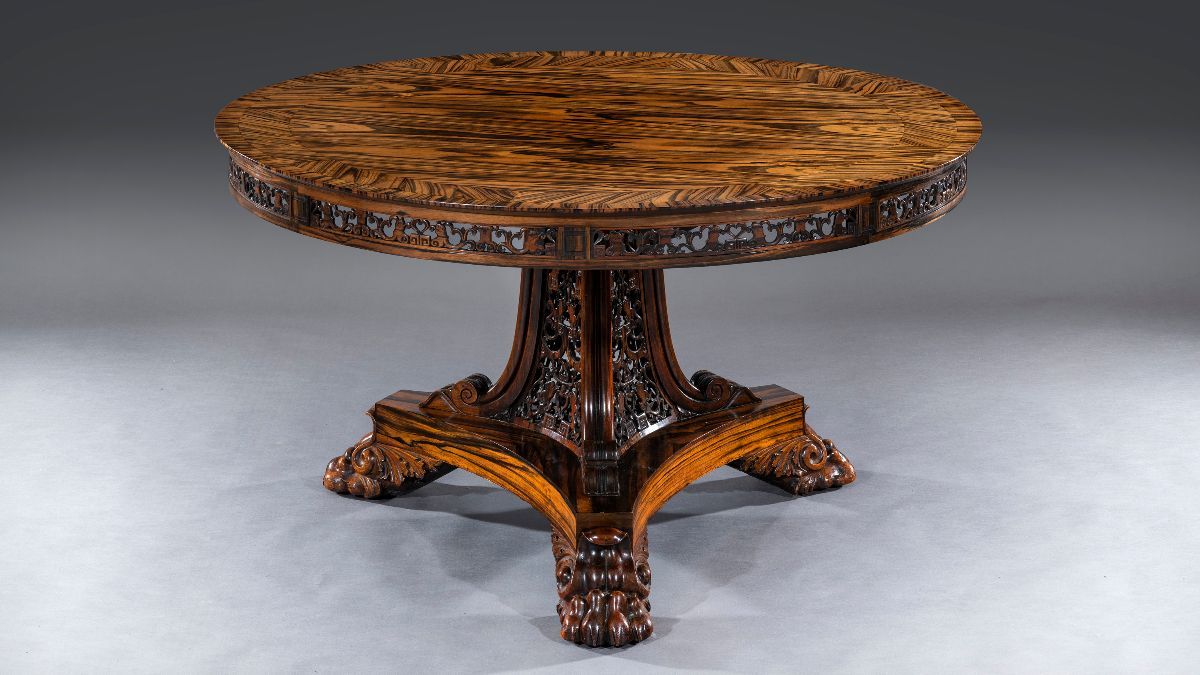 A mid-18th century wool and silk Verdure tapestry panel depicting an idyllic scene of two large birds on either side of a stream flanked by trees with an imposing mansion or castle on top of a hillock, wool and silk, 249 x 246cm (almost square), £6,600 is just one of the items for sale from textile and carpet specialist, Legge Carpets, also bringing two Persian qum rugs. It is rare to find two similar Persian qum rugs that can be used as an extremely decorative attribute to an elegant interior, each priced at £5,000.

Lesley Blackford presents a pair of Regency silk ribbon work pictures in original frames, £380 the pair. Witney Antiques has a relatively unusual 19th century American sampler by Hannah Stonehouse, worked in her 15th year, 1808, the year marking the beginning of the Peninsular War when the British, Spanish and Portuguese fought the armies of Napoleon in Portugal. Depiction of military subjects on samplers were relatively uncommon.

Glass features on a couple of stands with Brian Watson Antique Glass bringing a pair of French early 19th century elaborately cut beakers engraved with the coat of arms of a count, selling for £265 each. Although the name of the family has not been identified, it seems likely that these beakers were engraved for one of the roughly two hundred counts created by Napoleon Bonaparte between 1808 and 1815. 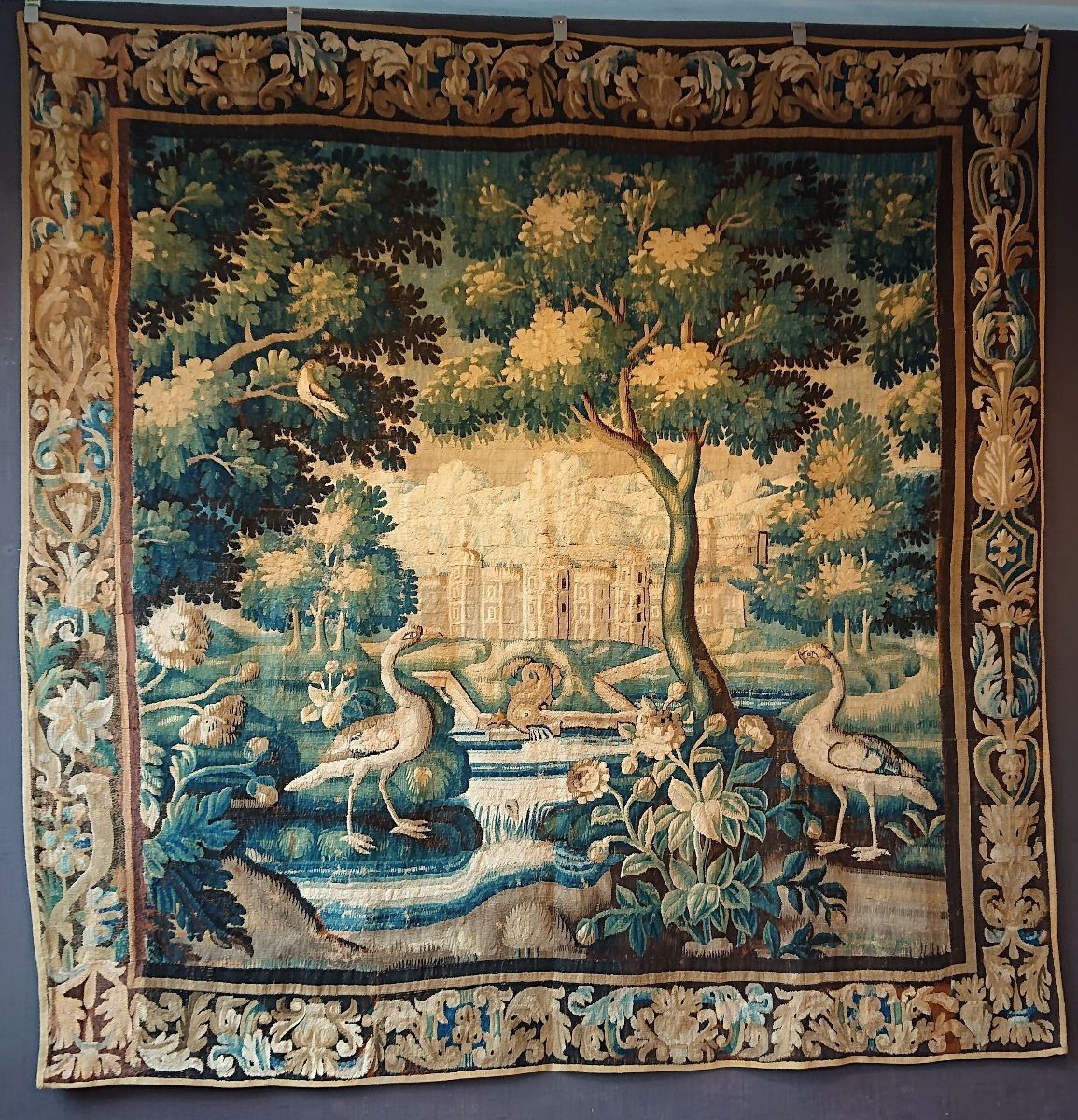 Amongst the items for sale on Hickmet Fine Arts’ stand is 'Paysage Pluie', a pillow shaped cameo glass vase, etched and enamelled with rainswept silver birch trees in a wooded landscape, by Daum Frères (signed Daum Nancy with the Cross of Lorraine), circa 1900, with a price tag of £10,500. This dealer also sells sculpture amongst which is 'Cheval Debout', a bronze by the important animalier French sculptor Isidore Bonheur (1827-1901), circa 1870, £4,750.

Modern British sculpture can also be found on Architectural Heritage’s stand including 'Carnival' by Paul Mount (1922-2009), stainless steel on slate base raised on a perspex plinth, signed, circa 1980, selling for £24,600 plus ARR. The CADA dealer also specialises in sculpture and garden antiques, amongst which is a pair of decorative French iron and tole work garden gates with scroll work embellished with tole work swags and urn with flowers and foliage, 128cm high, circa 1930, £2,400. 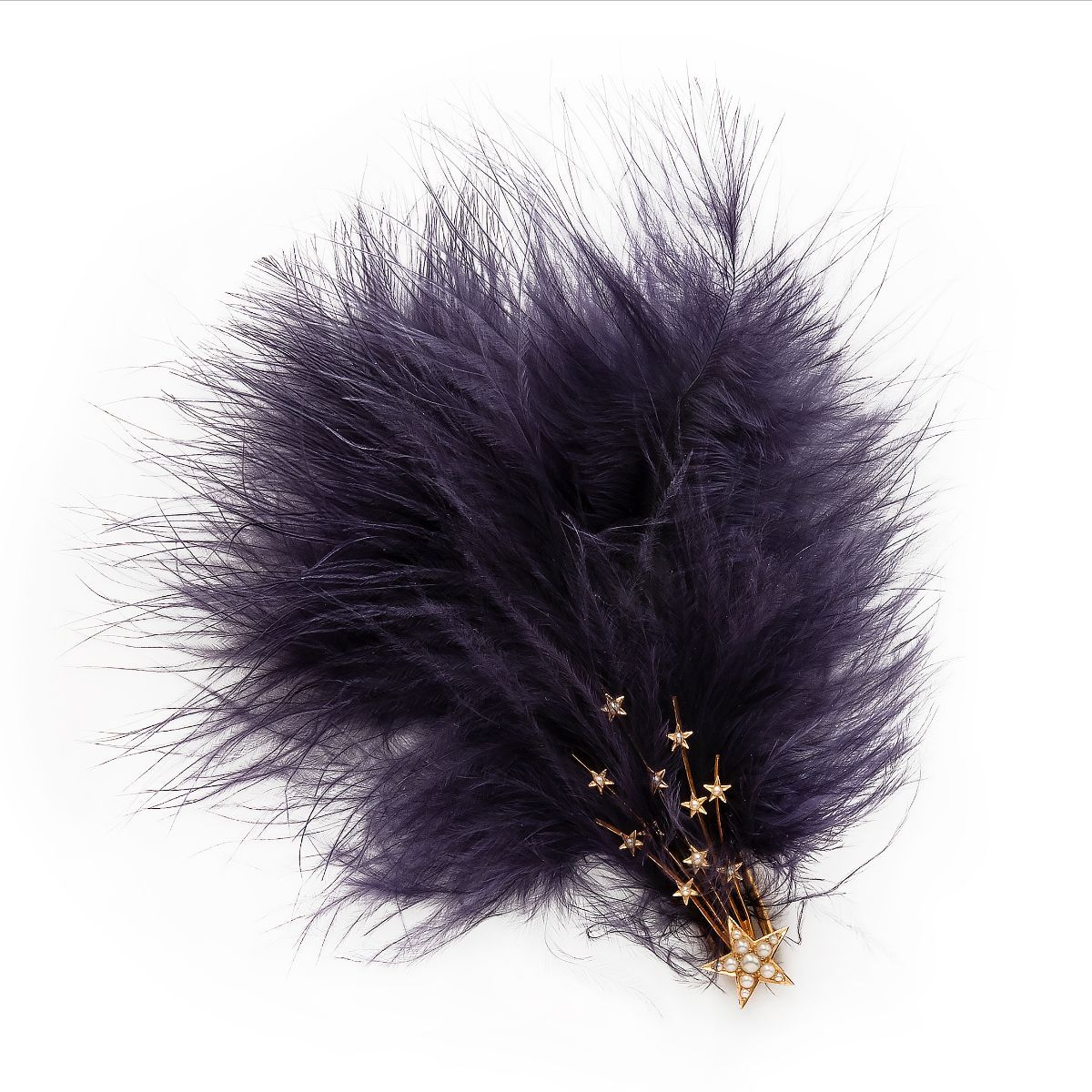 Mayflower Antiques specialises in works of art from the Renaissance and Baroque periods. For sale at the fair is a rare Charles I silver box with agate set lid, the sides neatly engraved with stylised flower heads, bearing the maker’s mark WB underneath, circa 1640, £1,950; a 17th century Spanish colonial mother-of-pearl casket with silver mounts, Mexico, £14,000 and a surprisingly contemporary looking late 17th century Bernard Perrot glass beaker with blue and white fili and retortoli.

Howards Jewellers, from nearby Stratford-upon-Avon, has an interesting selection of varied jewellery for sale including a rare engraved Royalist silver locket depicting King Charles I inside, 1649-1660, £3,950; a highly decorative feathered Comet hair piece with gold and seed pearl stars, circa 1890, POA; a Colombian emerald (certificated) and diamond cluster ring, French, circa 1890, POA and suffragette necklaces with precious gems. Timewise Vintage Watches joins the fair this year with sought-after vintage watches by Rolex, Patek Philippe, Breitling and a Hanhart German Luftwaffe pilot’s watch from WWII, £5,500. 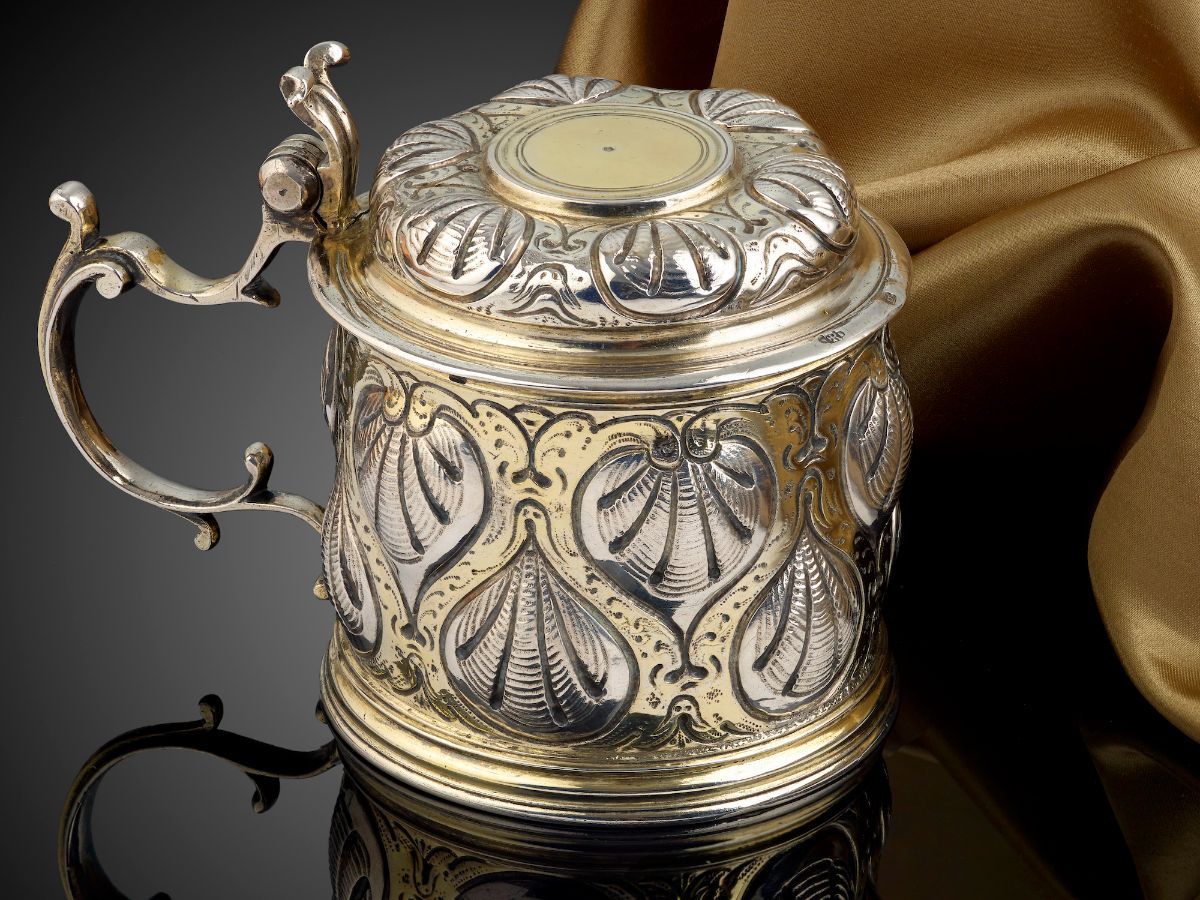 Two further specialist dealers at the fair are Stephen Kalms with fine English and Continental silver and long standing CADA members **Christopher Clarke Antiques**, from Stow-in-the-Wold, with travel items and campaign furniture. Fair director Cathy Hunt, of Catherine Hunt Oriental Antiques, said: “The Cotswolds has long been known for its fine art and antiques shops, a destination for many collectors and interior designers. Following the disruption caused by the pandemic, which meant we could not hold our fair last year, it will be new beginnings for the fair in its new venue at Compton Verney. Not only will our members put on a magnificent show with a great variety of fine art and antiques from across their individual businesses in the Cotswolds, all of which will be for sale, but visitors will also be able to enjoy Compton Verney Art Gallery’s exhibition and treasures, and also a stroll through its Lancelot ‘Capability’ Brown designed park.” 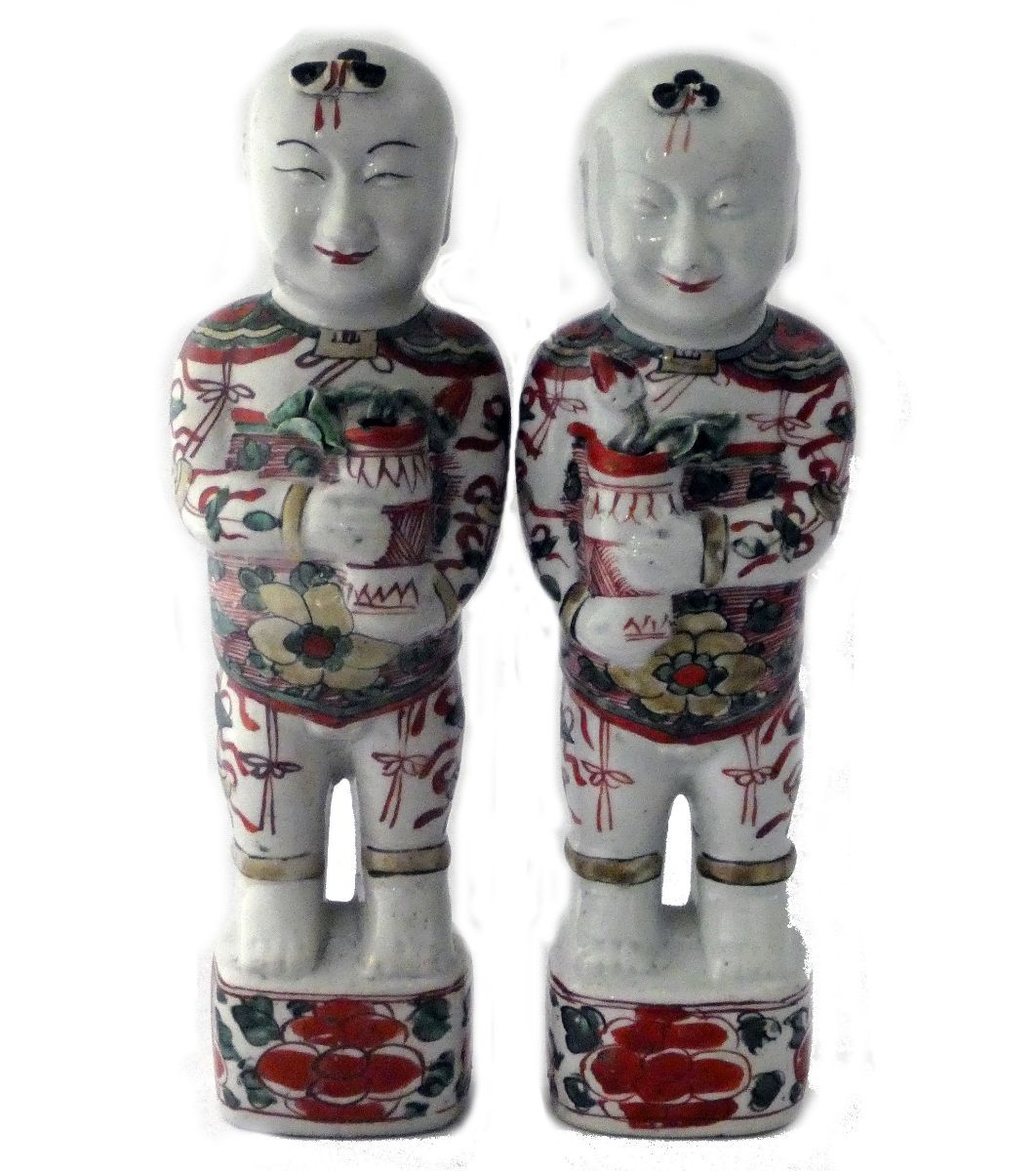 To register for a complimentary ticket for two people, visit www.thecada.org or email info@thecada.org 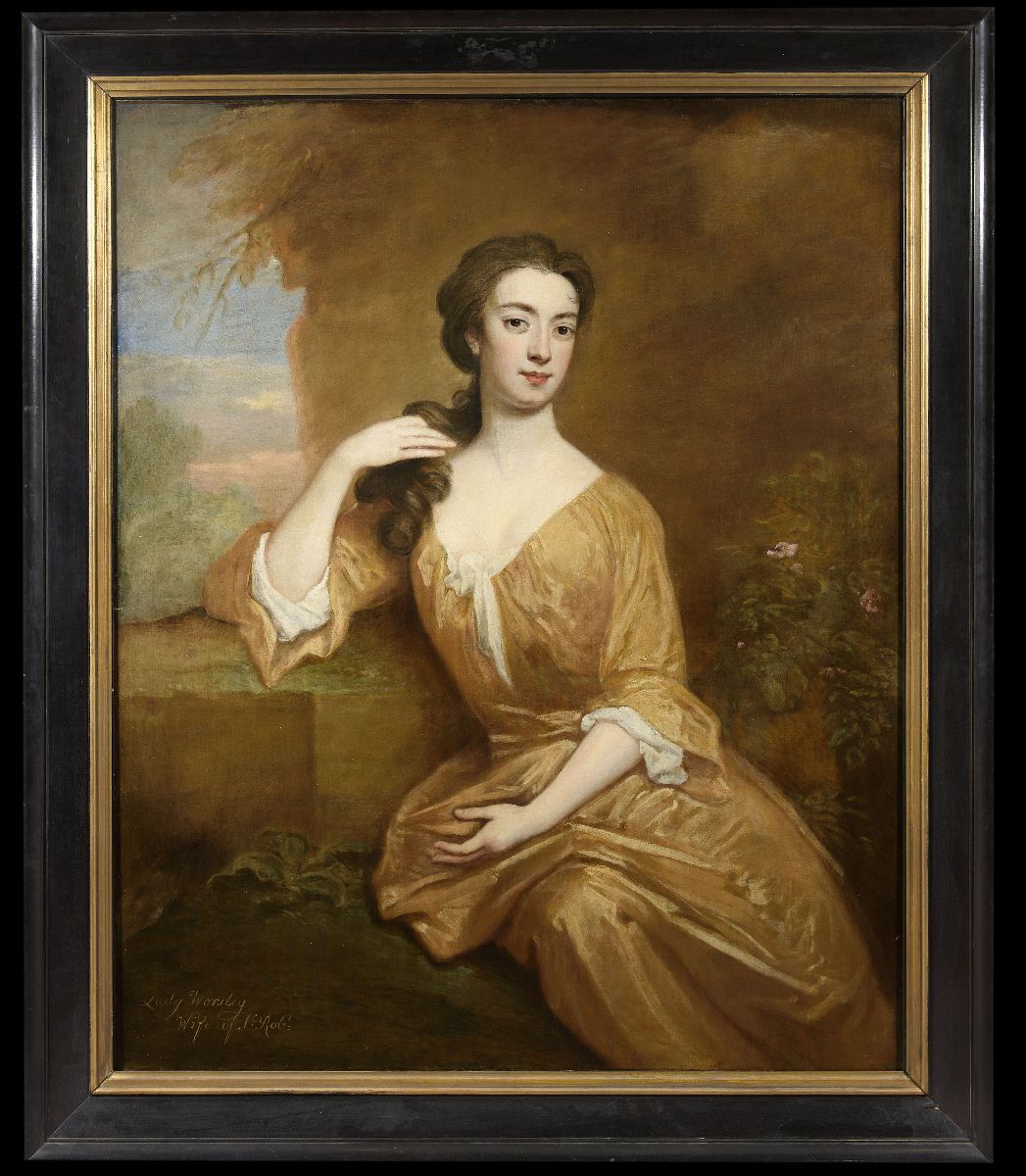 LOVE IS IN THE AIR

LOVE IS IN THE AIR